GET A QUOTE
Menu

With the attention the past months on the pandemic, and most recently on the national
conversation for change, little has been reported about the fundamental shifts occurring in
the Property & Casualty (“P&C”) insurance markets.

Our partners at MarshBerry have provided a report on the state of the market, and we share
this with you below. MarshBerry is a nationally recognized insurance consultancy and
analytics provider.

As referenced recently, while the S&P 500 and Dow Jones Industrial Average (“DJIA”) are
down on a year-to-date basis, the insurance industry is in the midst of perhaps one of the
fastest increasing rate environments since the 1985-1987 “hard market.” According to The
Council of Insurance Agents & Brokers in their First Quarter 2020 Commercial Property &
Casualty Market Index, the average rate increase across all account sizes was 9.3%. This
9.3% increase has accelerated from a 7.5% increase recorded during the fourth quarter of
2019, and a 6.2% increase reported during the third quarter of 2019. The report goes on to
state that this increase is the tenth consecutive average rate increase for all account
sizes.

It should be noted in the table below that Commercial Auto includes all manner of business
auto liability policies including service fleets, contractors, private haulers, and is not
limited to trucking. While Commercial Auto as a whole shows a slight drop off in rate, the
trucking segment has not as yet shared in that relief. 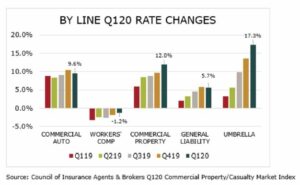 Perhaps even more telling is the breadth of rate increases across all major commercial
lines of business (except workers’ compensation). Umbrella and commercial property
coverages increased 17.5% and 12.0%, respectively, during 1Q20, eclipsing commercial auto’s
9.6% increase. Commercial auto over the past few years has seen perennial rate increases
due to sustained increases in claims severity resulting from distracted driving, increasing
physical damage repairs costs, and increased driving mileage. It should also be noted that
umbrella and commercial property coverages, typically written in the Excess & Surplus (E&S)
lines marketplace, have particularly affected the overall E&S rate environment. Finally,
while workers’ compensation rates are still falling, the rate of decrease (1.2%) is the
smallest decrease in more than four quarters.

As we have mentioned in prior announcements, the current P&C marketplace is markedly
different from the 2008-2010 experience. During 2008-2010, P&C rates were falling, and
unemployment continued its downward trajectory for many months. In today’s environment, P&C
rates are up substantially.

The reasons for increases are as various as the segments in which insurance is written, and
they include nuclear verdicts in the primary and excess layers, higher frequency of small
claims in the primary layers, social inflation, costs of replacements, and (frankly)
underpriced products in certain verticals that failed to carry the losses.

On an individual basis, a best-in-class insured will be able to minimize increases and
sustain coverage. However, increases in P&C coverages are the new reality for the
foreseeable future; it is not a question of “if” but “how much”.

Warriner & Associates Insurance looks forward to our continued representation of your
business in this increasingly hard market, working with you to obtain the best solutions,
market intelligence and pricing available.

Dear Friends, With the attention the past months on the pandemic, and most recently on the national conversation for change, little has been reported about

A Truck Driver Becomes the Centerpiece for a National Artwork Competition

“Essential Cowboy” By: 2021 MHS graduate Kunyang Li A 2021 Memorial High School student created a pencil drawing in tribute to all the essential truck

The Call on Washington

Effort is important. Against the titanic mass that is our U.S. Government, a system comprised of hundreds of legislators, thousands of staff and three hundred million

Hire an Insurance Agent You Can TrustFor Your Business